We have been Highly Commended by the Women’s History Network for our I Dig Canals project. Here’s what Chair, Elspeth King wrote: ‘The panel were particularly taken with training you offered to your volunteers and the knowledge gap your project has filled with this important piece of industrial heritage from a female perspective. You came very close to winning.’

There was some stiff competition from a great range of fascinating projects. You can see a little about all the entrants and the winner (Doing It Ourselves: The First Neighbourhood Co-operative Nursery, in Walthamstow) here:

It is the weekend of 26/27 September 1970. Margaret has driven her Mini to Parkhead, a derelict industrial area on the Dudley Canal, waste tip for Doulton’s ceramics. The whole area is buzzing with hundreds of enthusiastic workers clearing the locks. On the side of one of the locks there’s a small red tent belonging to Tina and her husband, Derek. Their boat is moored too far away to sensibly commute, so they decided to spend the weekend living in their tent in the middle of the action. Tina and Derek are kneeling on the grass in white boiler suits, leaning over the side of the lock. As they haul up heavy rubbish and buckets of debris from the bottom of the lock, they commiserate with the muddy volunteers down below, knowing their turn will soon come.

Meanwhile Margaret – keen to help clear the vegetation – has picked up a sickle. “Well, you’d have had a job to cut soft butter with it.” Now in her eighties, Margaret has vivid memories of that day, when she had set out to dig but ended up being “the woman who sharpens the sickles”. Both Margaret and Tina agreed to be interviewed for a research project entitled ‘I Dig Canals’, run by Alarum Productions in 2019/20 with financial support from National Lottery Heritage Fund.

The 1970 event, which took place exactly fifty years ago, was called the ‘Dudley Dig & Cruise’. Another interviewee, Sheila, told us that the evening before, she had made a treacherous two-mile journey with her husband Alan on their ex-working narrow boat, Laurel. Here is an extract from Laurel’s log book, written by Sheila:

Negotiated canal from Bumble Hole to Hawne Basin ready for Dudley Dig & Cruise. Experienced quite a lot of difficult patches with rubbish and scours [a reference to factory discharge pouring into the canal]. Finally arrived in darkness to rousing cheers.

Sheila will no doubt have spent much of that journey lifting or leaning on a heavy shaft, pulling a rope or shifting her slight frame to rock the boat and keep it moving, until they eventually made it to the small gathering waiting for the Cruise next day. She certainly kept fit, and to this group of enthusiasts a ‘cruise’ involved rather unglamorous on board activities!

At breakfast time the next day, the Mayor of Warley, together with other VIP guests, boarded Laurel. Leading a procession of four narrow boats, Laurel retraced the two-mile journey of the night before, plus a further three miles to Parkhead – the site of the Dig – arriving at lunchtime. Sheila’s job was to provide refreshments for everyone on board as well as chat to guests en route, impressing upon them the importance of the stretch of canal they were travelling along.

Sheila and Alan are my parents. I was fourteen at the time and wasn’t on board because I was taking part in a punishing twenty mile sponsored walk to raise money for the National Waterways Restoration Fund. The sum raised – £250 – was later donated to the Dudley Canal Trust (as it was then called) to help pay for the restoration of Dudley Tunnel. (The tunnel was reopened in 1973.)

Once the Mayor of Warley and several other mayors had completed their official duties, they needed to get back to their starting point. Someone asked if anyone had a car. Margaret – who by this time had sharpened quite a lot of sickles – said yes, she had a Mini. In a nutshell (no pun intended) Margaret gave them all a lift:

I ended up with four mayors – none of them small – in my Mini. I put the biggest one in the front with me, and the other three squashed in the back somehow. The joy of the situation was arriving at the point where all the official cars were, with the official chauffeurs, and the look of sheer amazement on their faces.

Accounts like these – fascinating, touching, funny and occasionally heart stopping – shed light on some of the volunteer roles women took on to further the cause of canal restoration in the Black Country and beyond. During the ‘I Dig Canals’ project, we recorded nineteen long form oral histories and several shorter ones which (once it is possible) will be available at the Canal & River Trust Waterways Archive in Ellesmere Port, completely transforming the currently available resources. To put it simply, there will be a women’s archive where previously there was not.

NLHF money enabled us to recruit, train and work with a dedicated group of fourteen volunteers, as well as improving our own skills in oral history and documentary research. While I concentrated on the interviews, Co-Director of Alarum, Kate Saffin, focused on documentary research, spending time at the National Archive in Kew and searching other collections in the Black Country for information and stories about the roles women took on more widely. Dudley Canal & Tunnel Trust supported us by generously donating premises (and a boat on one occasion) for our events. We had excellent training from Julia Letts, a very experienced oral historian and BBC radio producer; were able to employ our favourite film maker, Erin Hopkins, and provided work experience to a talented young designer, Laura Ndjoli, who designed our logo.

When coronavirus struck, we were, thankfully, nearing the end of the project but were forced to cancel final public celebrations. However, this meant we were able to put more of our time and energy into a 56-page book, a short film and a series of fifteen podcasts using extracts from the interviews.

Inspired by the women whose stories we tell, Kate and myself, together with Project Manager Nadia Stone, like to think we have embodied their never-say-die attitude. “Nothing was impossible in those days,” said Tina in her interview, “and it wasn’t impossible because we actually changed people’s minds.” 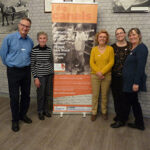 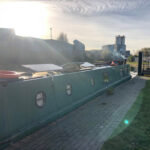